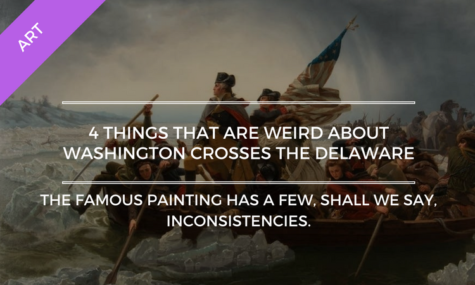 If you grew up in the United States or have ever made a trip to the Met, you’ve likely seen this giant painting of Washington Crossing the Delaware by artist Emanuel Gottlieb Leutze. And even if none of those ring true, you’ve probably seen a parody of the painting featuring Darth Vader or Richard Nixon or a bunch of adorable puppies (we’re not sure this last one exists, but it probably does). 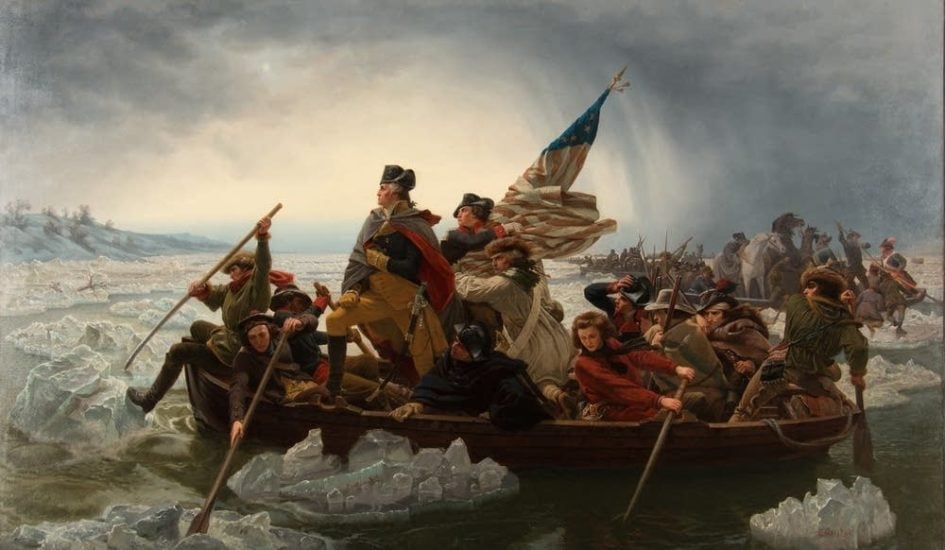 And with good reason: it depicts one of the most pivotal moments of the American Revolution, when George Washington stages his sneak attack of a Hessian camp on Christmas Day. Before this attack, many thought the American cause was about to die out.

Well, we all know how history goes.

Aside from the famous moment the painting depicts, it’s also just a pretty epic work of art. It’s huge, taking up an entire wall of the Met, and caused a gigantic frenzy when it first came out. To this day, gaggles of school children visit the painting every day.

But Leutze took some, shall we say, artistic liberties with the scene.

In other words… it’s super wrong.

Let’s take a look at why.

Reason No. 1 Why Washing Crossing the Delaware Is Wrong: The Crazy Icebergs

Have you ever been on the Delaware River in December?

But it’s not chunks of dangerous icebergs floating in the water cold.

At best, it’s probably got some sheet ice (that would make paddling boats across really annoying).

Leutze took some artistic liberties with the icebergs, making the scene much more dangerous and exciting than it actually was. Even before global warming got really bad, the Delaware didn’t exactly look like the waters around the North Pole.

Reason No. 2 Why Washington Crossing the Delaware Is Wrong: Washington’s Pose

Speaking of danger – you know what’s absurdly dangerous in this painting?

That’s right. Have you ever been on a tiny, rocking boat?

What about a tiny, rocking boat surrounded by (historically inaccurate) icebergs?

If you ever have, you’ll probably remember that you weren’t standing up, with one leg propped against the side of the boat, wig billowing in the wind like our pal George in this painting.

George Washington’s pose makes absolutely no sense for the context of the image, except for the fact that he looks majestic AF. In reality, he was probably hunched over, shielding himself against the icy winds and trying to, you know, keep from being spotted by the Hessian soldiers he was LEADING A SNEAK ATTACK AGAINST.

He was also probably trying to stay in the boat, not fall out in those choppy waters, but you know, point proven.

Reason No. 3 Why Washington Crossing the Delaware Is Wrong: The Whole Sunlight Thing

Washington Crossing the Delaware is so epic that we often forget the actual historical context that surrounds the painting.

Such as the fact that the painting depicts a sneak attack on Hessian troops. And when do sneak attacks (including this one) usually happen?

When Washington led his army to attack the Hessian troops, they left in the middle of the night, so as better to surprise the celebrating soldiers. The Continental Army crossed the Delaware under the cover of darkness, without the benefit of the flattering light Leutze used.

Now, to Leutze’s credit, he did make paint an overcast sky, but I have to imagine that the Hessian soldiers would have easily spotted George and Co. if they actually made the crossing in light this bright.

I’ll give Leutze a pass on this one, though, because a painting of the same scene in the dead of night would have been pretty dark.

Reason No. 4 Washington Crossing the Delaware Is Wrong: Washington’s Hair

The central figure of this painting is easily recognizable, even if you don’t know much about American history. The stately pose, the majestic wig, the tricorn hat – it’s George Washington, of course!

Only the George Washington depicted in this painting is what I like to think of as “Old George.”

“Old George” is the first president of the United States, an elderly statesman who just wants to go home and sit under his own vine and fig tree, taking a moment alone in the shade. (Are you singing One Last Time yet?)

But although “Old George” may be how we picture the leader in our contemporary collective mind, George Washington was not, in fact, always old.

He was actually young once.

At the time of Washington Crossing the Delaware, George Washington was a spry military commander in his 40s, not a distinguished statesman in his 60s. Leutze added a few decades onto dear George, probably to make him more recognizable to his audience. Leutze’s trick worked, but we bet George Washington is wishing that at least one image of his likeness survived that doesn’t portray him as a perpetual sexaganarian.

At the end of the day, do Leutze’s historical inconsistencies make Washington Crossing the Delaware a worse painting?

Of course not! If anything, they make the painting even more iconic, judging by the fact that it’s such a well-recognized image.

What’s important to remember in this, and in other scenarios, is that we’re often seeing the artist’s interpretation of events, not how the events actually unfolded.

And sometimes, the actual history can be just as (if not more) interesting than the artistic interpretation.