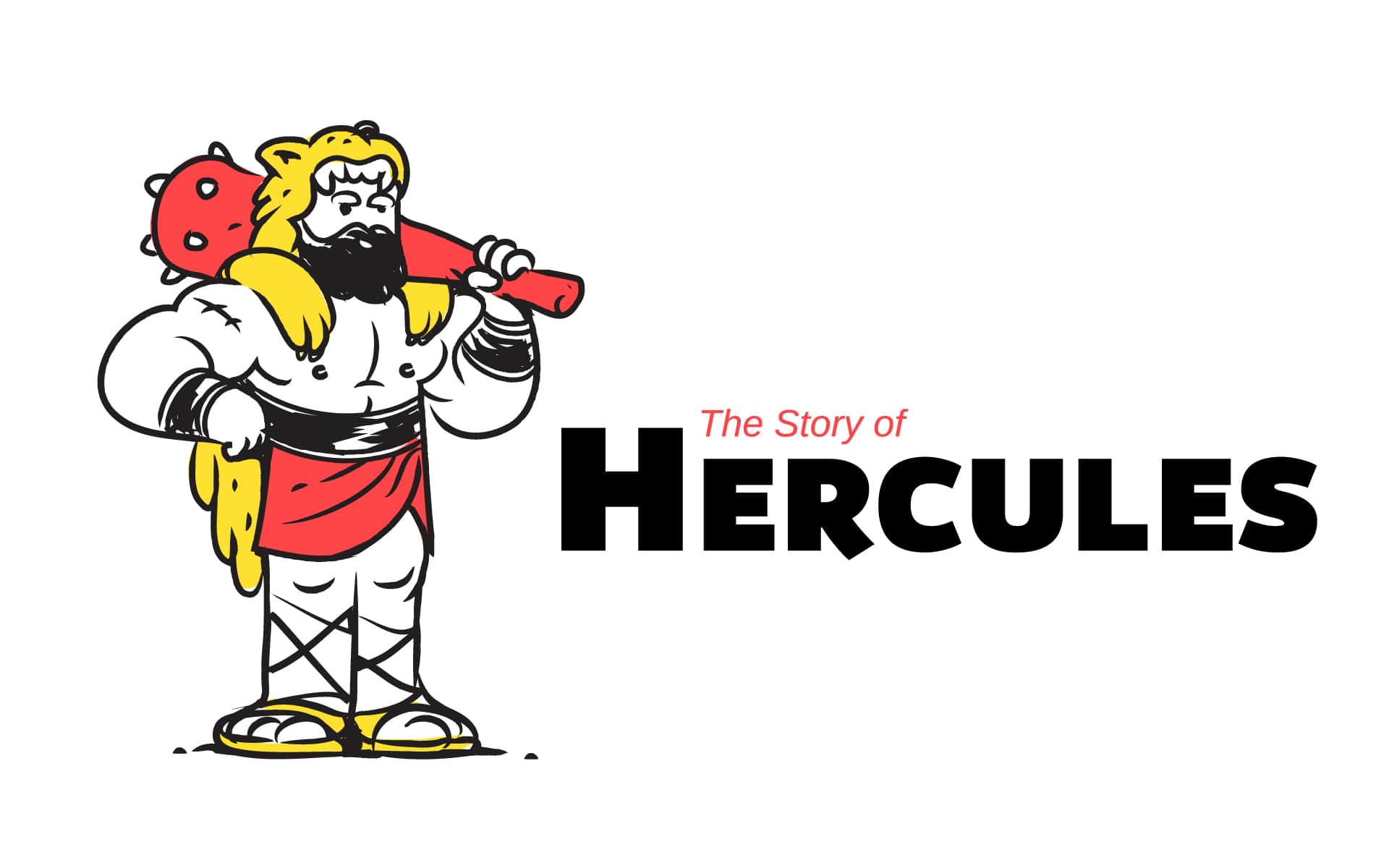 The story of Hercules starts before the great hero was even born.

Hercules’s father, Zeus, was known to slip out of his home on Mount Olympus in order to seduce nymphs and mortal women (with or without their consent… yeah, he kind of sucked).

Hera, Zeus’s wife, queen of the gods and goddess of women, marriage, and family, was jealous and vengeful toward her husband’s many mistresses and illegitimate children. But Zeus didn’t really care, so he kept stepping out on Hera and Hera kept exacting revenge on Zeus’ conquests.

On one such occasion, the object of Zeus’ affection was a mortal woman named Alcmene.

Zeus used his power to disguise himself as Alcmene’s husband, Amphitryon, which was extra level creepy. Unable to spot the imposter, Alcmene welcomed the king of gods into her bed. That night, she got pregnant and later gave birth to a son. Alcmene and her husband named the baby Hercules which means “glorious gift of Hera” in Greek.

When Hera discovered her husband’s secret affair had bred a child, she was overcome with jealousy, rage and hate. Determined to kill Zeus’s illegitimate son, Hercules, Hera sent two snakes to strangle the baby in his sleep.

Luckily for Hercules, having Zeus as a father meant he was a demigod, unusually strong and fearless. He grabbed each snake by the neck and strangled them just before they were able to strike.

The Real Story of Hercules is the Story of a Warrior

Hercules, also known as Heracles, Herculies, Herculea or Hercukes, is a prime example of a mighty warrior.

Without any more major interference from Hera, Hercules grew into a great warrior. He single-handedly led the attack that drove the Minyans out of Thebes. In gratitude, Creon, king of Thebes offered his eldest daughter, Megara, to the hero.

Hercules and Megara got married and had three strong sons. The family lived happily together.

It Wasn’t Happily Ever After for Hercules

It turns out, jealous Greek gods don’t let go of grudges so easily.

Determined to make him suffer, Hera once again interfered in Hercules’s life.

Hera used her power to get inside Hercules’s head. He fell into madness and went insane with rage. Under Hera’s dark influence, he gruesomely murdered his beloved wife and children. It doesn’t get any more real than that.

Even worse, Hercules had no idea that he had murdered his wife and children because of Hera’s trickery. When he came to, he was totally destroyed by his actions. With a broken heart, he set out to seek punishment for the horrifying crimes he had committed.

Hercules travelled to Delphi to ask Apollo (another son of Zeus and the god of prophecy) what he should do to rid his soul of this evil.

Even though it was no secret (among the gods at least) that Hera had truly been the cause of Hercules’s terrible crimes, Apollo commanded Hercules to endure a long and harsh punishment to atone for his sins.

Apollo sent Hercules to the city of Tiryns where he had to serve the cruel king, Eurystheus, for twelve years and complete twelve impossible tasks, known as the Twelve Labors.

Apollo promised that after Hercules had completed his punishment, his soul would be cleansed of evil and he could join the gods on Mount Olympus.

Not really. Here are the 12 labours that Hercules completed to fulfill Apollo’s wishes.

The 12 Labours of Hercules

Hercules was a real strong man, with really big goals. Here are his labours:

Basically, for 12 years, Hercules’ story was collecting a lot of stamps on his passport and he had to nearly die many, many times.

The Story of Hercules AKA a Life of Hardship

After Hercules successfully completed the 12 labors, Apollo’s promise of an immortal life on Mount Olympus was still many difficult years way. Hercules had to rescue the princess of Troy from a hungry sea-monster and help Zeus defeat the Giants in a great battle for the control of Olympus before he could take his earned place among the Olympians.

Many years later, Hercules remarried to Deianira, whose name means “man-destroyer” or “destroyer of her husband”. Yikes.

One day, upon returning home from what would be his last adventure, Deianira presented Hercules with a cloak. She had coated it in what she thought was a magic balm that would guarantee his love for her forever. Unfortunately for Hercules the balm was actually poison.

When Hercules put the cloak on it began to burn him. Unable to get the cloak off, Hercules was sure death was the only release from this agonizing pain. And so a huge funeral pyre was built for the hero atop Mount Oeta.

Just as the fire started to burn all around Hercules, the gods looked down from Mount Olympus. At that moment, Hera finally agreed that Hercules had indeed suffered enough. Zeus sent Athena to save Hercules from the burning pyre and bring him to Mount Olympus on her chariot. So that was cool.

Finally, at the end of Hercules’ story, he was welcomed home and allowed to spend eternity among the gods on Mount Olympus.