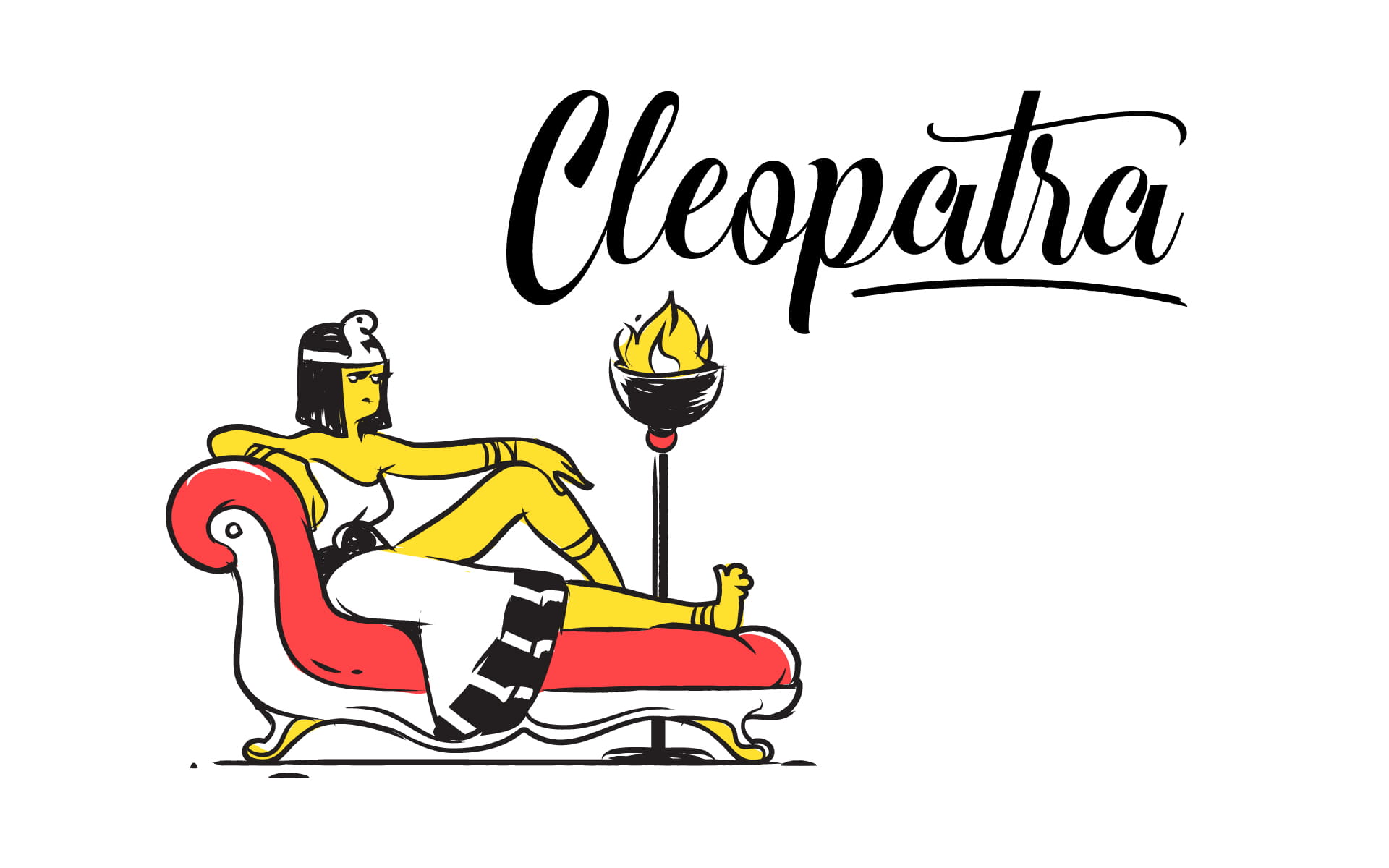 Cleopatra wasn’t just some incredibly beautiful woman hellbent on having affairs with Roman rulers. She was closer to Cersei Lannister: a ruthless military and political leader that Rome was absolutely terrified of.

Cleopatra was born Cleopatra VII Philopator in Egypt as a member of the Ptolemaic dynasty, a Greek family of Macedonian origin.1 So although she walked like an Egyptian* she was not technically, ethnically Egyptian.

As with many great royal families and V.C Andrews books, incest was the name of the game in Cleopatra’s family so her parents were probably at least half-siblings and, throughout her reign, she married not just one, but two of her brothers. When Cleopatra was 18 years old she became ruler of Egypt alongside her 10-year-old brother/husband and they fell in love with just like Dollanganger siblings (and yes I’ll stop mentioning V.C. Andrews now) and lived happily ever after.

Cleopatra was not about to share the throne with her baby brother so their rule was not a peaceful one. She even went so far as having his name removed from documents and making sure it was only her face on the coins.

Picture Cleopatra in your head.

Are you doing it?

We grew up with tales of Cleopatra’s youth and beauty and sex appeal because of her Hollywoodization throughout the years, but it’s more likely that Cleopatra looked more like that last image. Still beautiful, but not exactly Elizabeth Taylor.

Some historians even believe that Cleopatra downplayed her looks in order to be more respected. Thankfully, women these days are automatically respected, no matter what they look like…

While Cleopatra might not have had violet eyes, porcelain skin, and an Academy Award, she did possess the sexiest thing any person can have: a big ass… sexy brain.2

Cleopatra spoke several languages, was educated in mathematics, philosophy, astronomy, and could hold her own in any political or economic discussion. Like a lot of strong political women throughout history, Cleopatra did everything her male counterparts did. And she did it while walking backward in six-inch heels.

Now, Cleopatra’s brother/husband wasn’t too keen on ole Cleo trying to outrank him, so he was able to exile her from Egypt. She was down, but not out, especially thanks to a young man named Julius Caesar, and the carpet she rode in on. Or on in…

When Roman general Julius Caesar strolled into town, Cleopatra knew aligning with him was the only way for her to win back her throne. She also knew there was no way she could be seen walking in for a meeting with him so she, in a feat worthy of an Ocean’s movie, hid herself in a rolled up carpet and smuggled herself in to meet Caesar who welcomed her like the gift inside a Kinder egg she was.

The two soon became allies and lovers, ready to restore Cleopatra’s rightful place as HBICE (head bitch in charge of Egypt). She became Caesar’s mistress (or did he become her mister?) and the two had a son named Ptolemy Caesar, nicknamed Caesarion, which means “little Caesar.”

Once Caesar and his Roman soldiers defeated Ptolemy XIII, Cleopatra was once again in charge with a new brother/husband at her side, Ptolemy XIV. Whom she (allegedly) poisoned so she could set up her son, little Caesar, Pizza Pizza, as her co-ruler.

Cleopatra’s dalliance with Ceaser caused many a scandal with the Roman people who were just as outraged at this foreign powerhouse as they were intrigued. So many women adopted Cleopatra’s signature look that many statues of other Roman women are often mistaken as Cleopatra herself. After Caesar’s death by stabbing, Cleopatra left Rome, but remained partial to Roman military men. Such as…

After Caesar’s death, his friend and general Mark Antony summoned Cleopatra to figure out if he could trust this foreign woman who won the heart and mind of one of the most powerful men around.

Our girl Cleopatra, a woman with a flair for the dramatic, made an entrance worth ten Kardashian flower walls when she appeared dressed as the goddess Aphrodite on a golden barge rowed by silver oars with attendants dressed as Cupid fanning her.

Was this to impress Antony to win his favor?

Or a simple (well, not simple) distraction from the fact that Cleopatra was just as eager to size up Antony politically as he was her?

The reason for this move is uncertain, but what is certain is that from the moment Antony set eyes on Cleopatra, his heart, soul, and army, were all hers.

Mark Antony and Cleopatra soon married, procreated, and moved to Egypt where they started a drinking club named the Inimitable Livers (why is there no metal band named this?), threw lavish parties, and celebrated the fact that they believed they were the reincarnations of the Egyptian goddess, Isis, and the Greek god, Dionysus.

And they drank and partied and now lived happily ever after right?

Cleopatra: Happily Ever After…Or not.

Cleopatra had now successfully lost and regained the Egyptian throne and wooed not one, but two, powerful Roman generals.

She made folks pretty uneasy.

Soon Octavian, Julius Caesar’s heir and former ally of Antony, painted Cleopatra as an evil seductress who used to her lady powers to make a traitor out of Antony. Octavian and his buddies declared war on Cleopatra, but nevertheless, she persisted.

Cleopatra fought back against Octavian and his crew, personally leading several of Antony’s ships into battle like Mel Gibson in Braveheart, only with better makeup.

Cleopatra Loved Even In Death.

Unfortunately, Antony’s army was no match for the Romans and rather than accept defeat, the two lovers suicide pact-ed it on out of there, because what else is more dramatic and romantic?

Cleopatra paved the way for all strong female military leaders. She taught us that you can be sexy and still strong and that you can (and should) get whatever you want: whether it’s power, love, a family, the perfect winged eyeliner, or all four. We don’t see much evil in that.