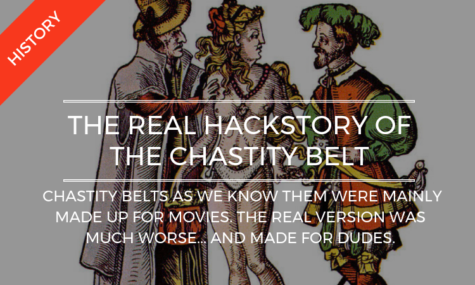 Arguably one of the finest films in American movie history is the 1993 classic, Robin Hood: Men in Tights. It has everything: a young Dave Chappelle, Cary Elwes, a cute little circumcision guillotine, and, of course, Marian’s Everlast-brand chastity belt, which proves impervious to the Sheriff (or Shire Reeve, if you’re old school) of Nottingham’s lecherous, literal jackhammering.

The common perception of the chastity belt is this: medieval metal underwear with a lock and key. The idea was that a husband, headed off to the Crusades, would lock up his wife’s lower lady-parts while he was off on a campaign for a very long time, effectively cockblocking any would-be interlopers seeking comfort with the lonely wife.

The Woman in the Iron Undies, aka the Chastity Belt

Take a moment to flit those eyeballs of yours over the following engraving:

This engraving was made around the last quarter of the 16th century, so it’s historical enough to be safe for work, despite the partial nudity. While there are a number of old chastity belts in museums (we’ll get to that in the next section), this right here is the real chastity belt: a concept devised for the Renaissance equivalent of a Playboy cartoon. The artist would make a woodcut, print up copies, and distribute them to the masses, much like a newspaper extra (or, if you’re reading this article in the 21st century, a meme). Hell, you didn’t even need to be literate to figure these out—I mean, I can get the jist and I can’t even read Early New High German.

There’s a lot happening in this mise-en-scène, so let’s do a little rundown. Sitting on the bed is the naked wife, wearing only a chastity belt—with it locked, she hands the key to her husband. The husband is all dressed up in the 16th-century version of a clever suit, complete with his walkin’-around sword (cough—phallus—cough). He takes the key as he prepares to leave the house for a work trip. While on this trip, he will have the peace of mind of knowing that his wife couldn’t possibly cheat on him while he’s gone, since she’s locked up her private parts and given him the only key that he’s aware of. The husband seems to have some trust issues—but then, his wife does seem to enjoy chilling in the nude while male guests bustle about the house, so his concerns may have merit.

At bottom right is another figure with donkey-cuckold ears. This fella is more clearly a jester-type, and this dumb motherf***er is trying to pour lice into a wicker basket. Why? Because trying to force your wife not to cheat on you is about as effective as keeping tiny bugs in a basket made out of sticks and holes. And why isn’t it effective? Because other men—shadow men—also have keys.

The chastity belt, then, represents a fool’s errand—rather than something that could ever have worked. 12

For good measure, here’s one more: 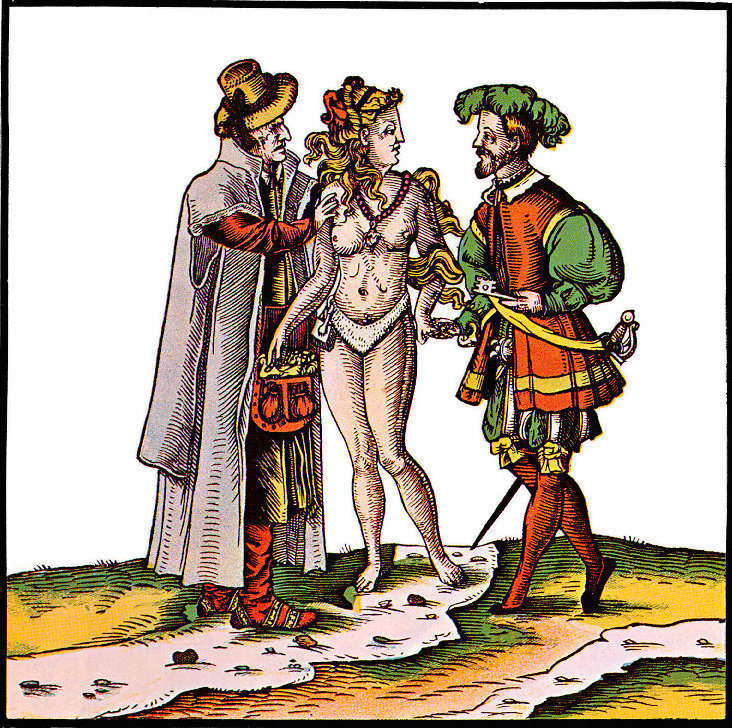 This 16th-century German woodcut is even more direct. This lady’s wearing a similar chastity belt (and even what looks like the same necklace). She has one hand in her husband’s coin purse, and the other in the hand of a young suitor who holds the key to her belt. 3

“Look, guy—I’ve seen real, historical examples of iron chastity belts in museums. So shut up,” you might be saying under your breath as you read this article. Well, I’m glad you’ve attacked me, because it leads to my next point: museum chastity belts are fakes.

Don’t get me wrong—many of these chastity belts are in museums for good reason, given that they date back to the 18th or 19th centuries, in some cases. But they are historical examples of fake artifacts, likely meant to be displayed as curios from the recent, stupid past. Maybe you’d put one on your coffee table.

That all makes good sense, until you start to really think about what wearing a piece of iron around your private parts for long periods of time (a crusading husband might be gone for years, or perhaps forever, for example) would do to the belt and the person wearing it.

One thing to consider is that stainless steel wasn’t invented until 1913—any iron or even steel chastity belt, made during the 15th century and placed in prolonged contact with skin, sweat, your bodily fluids, and oxygen, is going to rust something fierce. 4 Hell, even linens need to be changed regularly if you don’t want to develop contact sores on your body, and those are soft. By definition, you can’t take a chastity belt off (or what’s the point?), so you can’t clean and oil it, or give your skin a break. I’m definitely not a doctor, but you’d probably die from infected chafing. Or you could just, like, get a locksmith, or straight-up break the thing well before that ever happened.

So Why the Renaissance Cartoons? Why the Later-Period Forgeries of Chastity Belts?

As is true with a lot of the weird shit we find in medieval “low” art, these folks were just having a laugh—particularly at the expense of rich old dudes with young wives. Why is it funny to think about these old sugar daddies being used for their money and then cheated on? I can’t say for certain, but I’d chalk it up to resentment of the old and wealthy, and a penchant for schadenfreude. Or maybe it’s just poking fun at the wilfully delusional—old, wealthy men who believe they can buy the love of a woman half their age. It’s a character archetype we continue to rip on to this day.

As for the 18th- and 19th-century forgeries? Well, people like to make fun of their ancestors for two reasons: One is that our ancestors can’t defend themselves because they’re long dead. The other is that making our forebears look dumb and backwards makes us look even smarter and more advanced by the comparison. It’s textbook narcissism: tearing others down in order to lift ourselves up.

Given that logic, are not flat Earthers the true heroes of our modern era? In their fight to prove that the Earth is not round, they have retrograded our medieval predecessors, who actually knew that it was. It proves that medieval people weren’t as dumb as some would like to think—and that backwards thinking knows no chronological bounds. 5