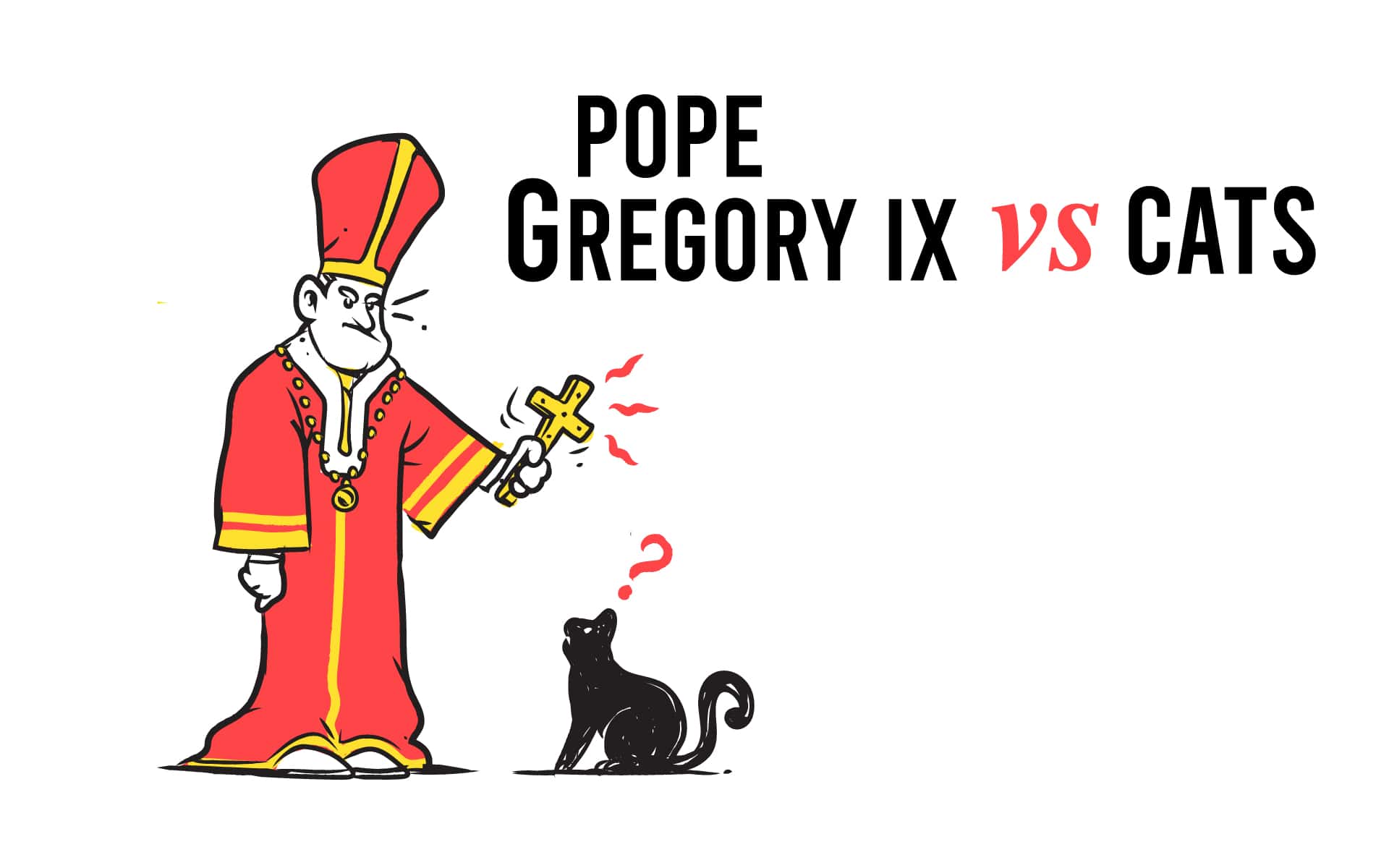 People like to dump on the Middle Ages for being Europe’s cultural and technological nadir, especially compared to the surrounding Classical and Renaissance periods. For a lot of folks, everything you need to know about the Middle Ages you can find in Braveheart or Monty Python—it was a simple, stupid period when superstition ruled the land, heads rolled daily, and people were covered in sh*t all the time. It was also a time when, people many believe, Pope Gregory IX hated on cats.

I’m not saying it was a great time to be alive, but it was a more complex time than people give it credit for. For example, ever heard of Oxford University? It’s a little school in England that was established in the year 1096. Granted, I’m sure it was easier to get into back then, but that’s right in the Medieval period. The proverbial compendium of collective human knowledge at that point was certainly shorter and harder to access than it is now, but people back then still used their brains.

So there’s a lot of weak info out there about the backwards things that Medieval people were wont to do. One example is the idea that Catholic fear drove people, including Pope Gregory, to wipe out cats, which resulted in a population explosion among plague-infected rodents, thus leading to the Black Death. For some reason, we find the idea that our ancestors were dumb rather appealing. If they were dumb, then that means we’re comparatively smart. The only problem is that this story probably isn’t true.

The story you’re most likely to find in popular history articles goes something like this:

Cats were brought to Europe from Egypt by the Romans and enjoyed a decent reputation for a long time—probably because they were such a boon to agricultural societies. Vermin did a number on harvests, but cats were nature’s perfect solution: they literally can’t eat anything that isn’t meat, which means that they pose no risk to the crops. Meanwhile, they need that meat on the regular and know how to get it, so they’re great at killing and eating vermin. My guess is this had something to do with ancient cat worship in places like Egypt, which made its clams by farming the fertile land around the Nile.1

But feline-human relations deteriorated sometime in the early 1230s (CE) when Pope Gregory IX issued a papal bull called Vox in Rama. This bull, the story goes, declared cats as the instruments of Satan, and set Medieval Europe on a great cat purge, with special attention paid to black cats, who were particularly Luciferian.

So, cats went from being the targets of pagan worship to Catholic contempt for these perceived similarities to the devil. This seems to add up for the modern reader. Medieval people were indeed superstitious (but so are modern people), and cats are great but, let’s face it—they’re assh*les. They fly in the face of the Christian idea of God putting the natural world and its creatures here for humanity’s benefit. People can make all manner of animals do what we like—we can teach oxen to plow, dogs to fetch game, elephants to paint, and ravens to hold grudges.2 But you can’t make a cat do anything. And that’s because its body is invested with the spirit of the Morning Star himself.

From there, it’s just a couple of logical leaps to the connection to the Black Death: inspired by Pope Greg IX’s bull, everyone across Europe killed off all the cats. Then, when the rats came bearing the Plague, there were no mousers left to keep the disease in check.3

While I cannot say for certain that things didn’t happen this way, there appear to be holes. To start, let’s look at what Pope Gregory IX actually said about cats in his bull (special formatting is my own):

The following rites of this [sect] are carried out: When any novice is to be received among them and enters the sect of the damned for the first time, the shape of a certain frog [or toad] appears to him.

Some kiss this creature on the hind quarters and some on the mouth, they receive the tongue and saliva of the beast inside their mouths. Sometimes it appears unduly large, and sometimes equivalent to a goose or a duck, and sometimes it even assumes the size of an oven. At length, when the novice has come forward, [he] is met by a man of wondrous pallor who has black eyes and is so emaciated [and] thin that since his flesh has been wasted, seems to have remaining only skin drawn over bone. The novice kisses him and feels cold, [like] ice, and after the kiss the memory of the [C]atholic faith totally disappears from his heart.

Afterwards, they sit down to a meal and when they have arisen from it, the certain statue, which is usual in a set of this kind, a black cat descends backwards, with its tail erect. First the novice, then the master, then each one of the order who are worthy and perfect, kiss the cat on its buttocks. Then each [returns] to his place and, speaking certain responses, they incline their heads toward to cat. “Forgive us!” says the master, and the one next to him repeats this, a third responding, “We know, master!” A fourth says “And we must obey.” 4

So what’s up with this? There’s a little bit about a cat in the third paragraph but what Gregory is really talking about here is a ritual carried out by a Satanic sect, as reported by an overzealous inquisitor named Conrad von Marburg. This dude’s job was to rid Germany of heretics, so he had plenty of reason to stoke the Pope’s fears of heretical activity (gotta keep that job). That, or he was a true believer, or both. Either way, his account can’t be true. Statues of black cats don’t come to life, and you sure as sh*t can’t get a cat to walk backwards and let you kiss its butthole.5

The most you can say about cats from this papal bull is that they are perhaps among the icons worshipped by a Satanic cult. It wouldn’t be the first time Catholicism has decided an animal once worshipped by pagans needed to be rebranded as Satanic (see: goats). The bull does not, however, dictate that Catholics across Europe kill all cats to stop Satan.

The purpose of Vox in Rama, rather, was to condemn a cult that had allegedly popped up in the Rhineland—and the bull was specifically sent to the city of Mainz. So, rather than being a document banning cats from Europe, it was a letter sent to a city warning them about a cult.

Like a lot of other myths about history from the Middle Ages, the idea that Europeans wiped out cats and then paid for it with the Black Death makes more sense the less you think about it. But it starts to fall apart once you roll it around in the ol’ brainpan.

First, consider the dates: Pope Gregory IX’s papal bull was issued between 1232 and 1234. The Black Death came in 1347. I suppose it’s possible that Vox in Rama simply set the stage for a cat-killing trend that would, generations later, result in the Black Death. But this means that a papal bull that didn’t tell people to wipe out cats and was only sent to Mainz somehow influenced the majority of people throughout Europe to kill off all their cats, and to stick to it over the course of the next 115 years.

Further, the plague wasn’t a one-off event in Europe. It kept happening, let’s say once per generation, until the 1700s. The theory that plague pandemics happen amidst a cat vacuum doesn’t hold up: Europe didn’t keep its cat population depleted for nearly 500 years. Cats breed quickly, know how to survive on their own, and are hard to catch. Good luck keeping them down for half a millennium.6

Maybe the biggest hole in the cat theory comes from the history of the plague. The disease was ravaging Asia before it ever made its way to Europe. And each time it hit Europe again, it appears to have come from Asia. And the Black Death didn’t just travel to Europe—it did its thing in Egypt, too, where it may have done more damage than it did in England.7

Remember: Egyptians were known for being cat lovers, and Asia is where cats originally came from. And neither of these areas were parts of the Holy Roman Empire and thus subject to anything Pope Gregory IX might have said (but didn’t) about a no-cats policy.

Lastly, a bit of science about the plague: the disease is caused by the bacterium Yersinia pestis and is initially transmitted by fleas, which pass it to their hosts. Potential infected flea hosts include: rodents, humans, dogs, and cats. And whatever else fleas like to nosh on.8

I live in a city, so I have plenty of experience with both cats and mice. Guess what? They both carry fleas, only the mice never jump in my lap and bunt their head-glands all over my jeans. So, I’m not so sure cats stop the plague. They definitely don’t stop fleas.

I’m coming out pretty strong against this cat-plague connection, but the truth is I can’t say for sure. While there appears to be no evidence that Pope Gregory IX ever told people to kill cats, there have been smaller historical examples of Medieval folks killing cats for weird reasons.

For example, 79 medieval cats were mysteriously slain in Cambridge, England, by the townsfolk in the 13th century. People in medieval Ypres, Belgium, had a festival called Kattenstoet where they’d throw cats from the belfry tower to symbolize the killing of evil spirits. Though, really, they were dealing with a cat infestation and decided to make it an excuse to drink. You know, small-town sh*t.9

These were, however, local affairs and don’t serve as proof of the kind of massive cat recall modern folks have inferred from Pope Gregory IX’s bull. These inferences have led to a story that appears to lack evidence.

But myths often transcend evidence, don’t they? Even those among us who love cats (not me, I like dogs) freely admit that they are mercurial and probably evil animals that deal death for fun and would eat our eyes if they got the chance. We accept this story—that we humans once crossed cats and it resulted in one in three of us dying—because it just feels rignt.